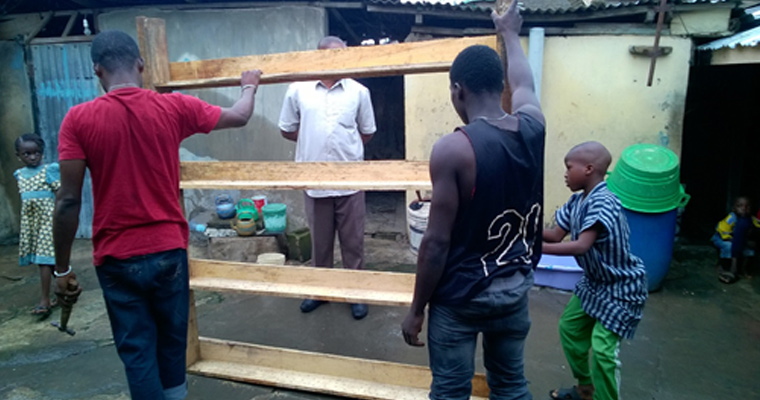 When did this project take place?

Following the participatory action approach to research with knowledge and involvement of local people pursuing a research topic influenced and outlined by local priorities, the aim was to start a new project in which the prototypes were commercially viable vertical green farms, which will produce food and medicinal plants. In this new project, The Agege community was approached to adapt their design and improve aesthetics and at the same time enable food and medicinal plants to be cultivated.

To structure the business systems that will secure economic development for the community, the first step was to build business relations at the local level to secure the supply of materials, workforce, skills and knowledge of the business environment. This created a rudimentary yet functional supply chain and operational process for the early VGS prototypes.

Two new prototypes were installed using the revisited design while trying to implement the proposed business model to make them commercially viable.

Together with the local community we took stock of the resources and competences required to sustainably produce and install the VGSs. Based on the information and community survey conducted, a formal business plan was developed, including a more defined cost structure, resource implications, and commercial forecasts.

Currently, we have employed community members to take care of the prototypes and provide updates (through photographs) on the growth rate of the plants.

Who has benefited from the innovation?

Low income groups, comprises of 70% of the total population ofthe22million people in Lagos, thus, it is not uncommon for them to live in blighted communities devoid of greenery. The societal challenge is to provide a pocket of green (AVF) that contributes to the health and wellbeing of the community through planting and growing medicinal plants and fresh food.

The beneficiaries from this project is three fold:

Subscribe to our newsletter and be the first to know about upcoming events: